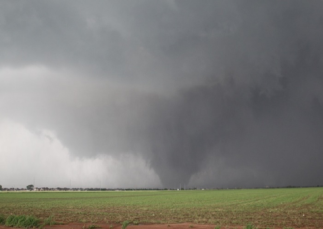 Storm Chaser Footage of a Tornado in Newcastle, Oklahoma headed towards the Newcastle High School.

Greetings from the lovely state of Oklahoma. My name is Evelyn Cox and I am the Public Broadcasting Preservation fellow partnered with Oklahoma Educational Television Authority (OETA). I represent the Spring 2018 Cohort from the School of Library and Information Studies at the University of Oklahoma and have been blessed to work with outstanding mentors and advisors throughout this fellowship, collaborating with my host station mentor and Vice President of Operations, Janette Thornbrue and the talented staff at OETA; my local mentor and Political Commercial Archivist at the University of Oklahoma, Lisa Henry; and my faculty advisor and Director of the School of Library and Information Studies at OU, Dr. Susan Burke. It has been my honor to explore and select for preservation from the treasure trove of audiovisual content within the OETA Archives housed on both analog and digital tapes dating back to the 1970s.

Previously identified as Native American territory prior to statehood, Oklahoma Educational Television Authority’s collection is a glimpse into the past, covering topics and exploring issues that are relevant to the diverse cultures represented, both then and now. Issues such as racial diversity, terrorism, natural disasters, war, and poverty become the catalyst for unity and the impetus for exploration, growth, and acceptance. This collection is an eclectic mix of at-risk public media material from the Oklahoma Educational Television Authority (OETA) Archive with contributions from the Oklahoma Department of Wildlife Conservation Archive. At the heart of this collection, are the people. The resilient men and women who have both contributed to the legacy of Oklahoma as well as the mosaic of our great nation in the area of art, music, science, exploration, politics, religion, architecture, literature, language, etc. Oklahoma Legacy is a culmination of indelible impressions of perseverance, fortitude, resilience and pride.

Exploring the Legacy of Oklahoma

Elizabeth Smith (right) and Margaret Anne Hamilton of Enid, OK (left) are WASPs that were given Congressional Medals for service During WWII.

As I combed through the OETA Archive, I felt giddy with excitement. Oklahoma has so much rich, culturally significant and diverse history that many people do not have access to. I could not believe that because of the PBPF fellowship, I would have the opportunity to select material that would be accessible online at American Archive of Public Broadcasting’s website and preserved at the Library of Congress. What an honor. I was like a kid in a candy store, eagerly anticipating the chance to break out the audiovisual equipment and get reacquainted with the treasures of our past. I found information about Amelia Earhart and the Woman Airforce Service Pilots (WASPS) of Oklahoma who bravely contributed during World War II. People like Betty Riddle of Tulsa, Oklahoma are our very own Wonder Women. Talk about girl power.  There was information about Clara Luper, known in Oklahoma as the mother of the sit-in and a pioneering leader during the American Civil Rights Movement. She marched with Dr. Martin Luther King, Jr. I found information about “Pistol Pete” Eaton and black and white footage of the Land Run of 1889, as well as Quanah Parker the great Comanche leader. I was just scratching the surface! Thanks to the American Archive of Public Broadcasting @amarchivepub a collaboration between the Library of Congress and WGBH this will be available to people throughout the United States from a centralized web portal at online at americanarchive.org.

Digitizing the At-Risk Material: Collaboration is the Key to Success

I was chomping at the bit and excited to exercise what I learned during Immersion Week hosted at WGBH Education Foundation in Boston. Like any worthwhile venture, I had setbacks of my own to overcome; but if I learned anything from the material selected for this collection, I learned that adversity is just a temporary setback that can be endured with perseverance. I counted my setbacks as badges of honor, which were many. We experienced setbacks regarding copyright issues. We had equipment issues right out of the gate. We had a BetacamSP deck that worked for two seconds. We had issues getting the older technology to play nicely with the new technology. I had so much support and help from my Academic Advisor here at the University of Oklahoma School of Library and Information Studied as well as from the staff in our SLIS office, my local mentor Lisa Henry and OU technical support Gary Bates, all of whom devoted countless hours trying to get our equipment up and running. 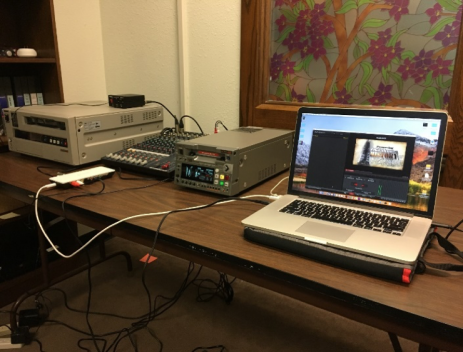 School of Library and Information Studies at the University of Oklahoma’s Digitizing Station with a BetacamSP and DVCPro decks.

I also had great support from Janette Thornbrue at OETA. I can’t say enough about how wonderful everyone has been through this entire process. The collaboration between AAPB, WGBH, OETA, and the University of Oklahoma models the kind of collaboration needed to effectively provide access to training in audiovisual preservation, allowing for a pool of resources and support to future archivists on a local as well as national level. I feel so blessed to be part of such a wonderful program!

For more updates on the Public Broadcasting Preservation Fellowship project, follow the project at pbpf.americanarchive.org and on Twitter at #aapbpf, and come back in a few months to check out the results of their work.